Are mortgage interest rates going up?

Mortgage rates have been at historic lows for three years, but it looks things are starting to change in the mortgage market. Rates are now at the highest level in four months, and this week they have moved higher for the second week in a row.

The rising rates and low housing inventory caused mortgage applications to fall flat this week, according to the latest data from the Mortgage Bankers Association. Freddie Mac said that mortgage activity, which has benefited greatly from low mortgage rates post-Brexit, is starting to see a slowdown in refinance activity that will persist into next year as the mortgage market transitions to a purchase-dominated mix.

In a recent survey by BankRate, more than 4-in-10 Americans (41%) admit they’re concerned about rising interest rates in 2016. Americans are most worried about how rising interest rates might affect their personal finance situation (18%) and what consequences may be for the economy/stock market (16%) in a rising rate environment.

Why are rates going up?

There are many factors that determine mortgage rates, and the lender is only partly responsible for the interest rate that you will be charged for your home mortgage. In a free economy, mortgage rates are dictated by the market, which is made up of investors who purchase and sell what are known as mortgage-backed securities (MBS).

Rates are largely driven by the financial markets such as the bond markets, and most closely follow the yields (or rates of return) on United States Treasuries. Investors tend to shift some of their investments to mortgages with lower interest rates. Depending on how volatile the situation is, the mortgage rates being offered to borrowers will also fluctuate.

It is not just the U.S. markets that affect rates, the global markets also play a large role in how rates are determined.

For example, back in June, the European stock market plunged 2-3% and the Dow was down 300 points, losing a combined $2 trillion in just two days following Britain’s vote to leave the European Union, which is commonly known as Brexit. This was the worst sell-off in worldwide stock markets in history.

Following the Brexit news, the Mortgage Bankers Association chief economist, Michael Fratantoni, predicts rates will go up to 4% by the end of the year, and as high as 4.8% by December 2017. Fratantoni had said,

“At this point, it is unclear whether this will just be a short-term disruption, or whether it will have a longer-term impact. Our best guess at this point is that the impact on the mortgage market will be to keep mortgage rates lower for longer, likely leading to another pickup in refinance activity.”

Another factor that affects the mortgage rate is the inflation rate because investors naturally demand more interest when they expect the value of their money to decline in the near future. Currently, year-over-year inflation is at 1.5 percent, the highest it’s been since October 2014.

Individuals who want to apply for a mortgage during a period of high inflation fears are going to encounter higher mortgage rates. Slower economies tend to have lower interest rates to encourage spending and investing. Lower mortgage loans are available during periods of low inflation.

Current rates for the 30 year fixed mortgage are still low, with an average of 3.52%. Last year at this time, the 30-year averaged 3.79%, so we are still at historic lows. But this can change soon.

Janet Yellen of the Federal Open Market Committee, or FOMC, will meet days before the election on November 2, to discuss whether they’ll raise the Federal funds rate. Mortgage rates may start to creep up even higher in 2017, especially if the Fed rate is raised on December 14, with experts saying there is a 73.6% chance of that happening.

Last year the Fed raised rates that caused a sudden uptick in rates, which may happen again this year as well. 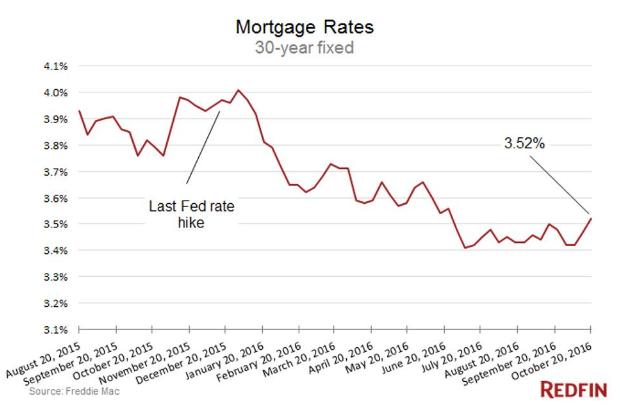 Because all of these are quite complicated, what the borrower could do is shop around to get familiar with the different mortgage rates and terms being offered. You should also try to inform yourself of the average national rate to have a benchmark to determine if the rate being offered by a lender is reasonable.

If you would like to discuss the current mortgage market, or get a live rate quote on a home loan, please feel free to call me, Erik Sandstrom, with Caliber Home Loans at 1-800-779-4547; or email me your question to [email protected]